Our HVAC system is almost fully installed! We are so excited to turn on some A/C in this house! It has been very frustrating dealing with our contractor! Starting all this work in the hottest and muggiest month of the year has resulted in some unpleasant working conditions, and we are so looking forward to cooling off a bit. We decided to install a mini-duct HVAC system, which takes up significantly less room than traditional HVAC systems–here you can see the small ducts that we plan to hide behind a little wall that we framed. We have to wait for the city to inspect the system before we finish the wall with drywall.

Our new HVAC system left us with 8 defunct radiators and a huge boiler in the basement to dispose of. Our radiators are huge — each weighing in at over 400 pounds of cast iron. They are connected throughout the house by iron pipes that weave between floors and walls and ceilings. We were afraid we’d have to cut into the (soon to be refinished) wood floors to remove the  pipes. Apparently cast iron used to be highly valuable and junk haulers would pay homeowners to remove them to exchange for cash at scrap yards. Due to changes in the global economy, cast iron is essentially valueless now. So we couldn’t figure out who to hire at a reasonable price to take these damn things out of our house!

So how exactly do you remove a huge, heavy radiator? It took a while to figure out how to remove them and who could haul them away, but Jeremy finally found a solution! Jeremy removed the radiators from the pipes by using a huge wrench and/or cutting it free with a reciprocating saw. Then he simply turned the pipe that was sticking up through the floor to detach it. It took a four men and two trucks to haul away all that cast iron, but they’re finally gone!

You can see the small hole where the pipe use to come out of the floor.

My hero admiring his handiwork 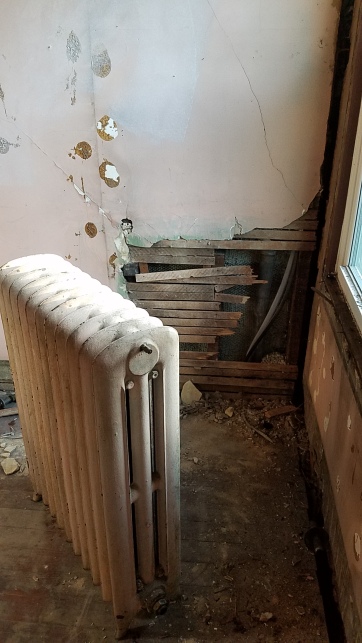 Don’t mind the mess behind the radiator, it will soon be covered in a new wall!

A crew of four dudes hauled away the radiators and boiler for the meh price of $550.

Unrelated: Our basement is quite content acting as a storage unit for all our possessions as we crash at Liz and Harry’s place this month. I realized I never shared how we cleaned it out. After searching high and low, we simply could not find a company to clean out our truly filthy basement. So god dammit, we did it ourselves! Jeremy and I wore ventilators and went to work sweeping and vacuuming all the dirt and cobwebs from the basement. We even had to scrap the floor to remove some mud that flowed in during a rain storm (we think we fixed the water issue for now).  It’s still not my favorite place to spend time but it’s better than before. 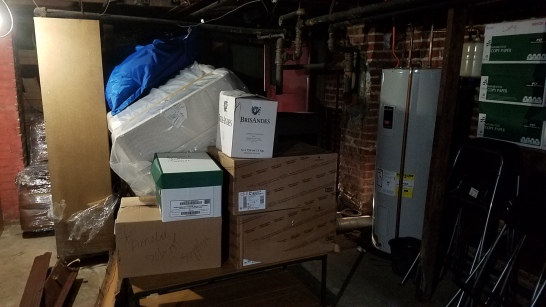 View from the basement

My hero, @dcjerbear cleared out years of crap from our HVAC ducts. The ducts were completely clogged, blocking all the air to upstairs. So he decided to cut a hole in the basement ceiling and poke around. You will not BELIEVE what he found. #homerenovation
Just another normal weekend at our new house. @dcjerbear has been cleaning out our HVAC ducts which are stuffed full of the most random crap that fell down the ducts over the years
We bought a new (old) house!! And I made my first reel! Follow along as we do lots of fun little projects on our new home
@andreuhhhhhh what were we thinking? This is from 3 years ago today.
Welcome to the Basement Glowup project! It took about 6 weeks to take this condo from sad, putrid, and scary to shiny and new! We fixed a lot of water damage, ripped out the kitchen and replaced everything, painted all the walls and ceilings, and put in new floors in the living room and kitchen. It’s amazing what a little effort can do—it increased in value over $90,000 which we can use for our next project!
Another shot of the same apartment. Hi cute little pretty kitchen! Swipe for the after (minus the dishwasher)