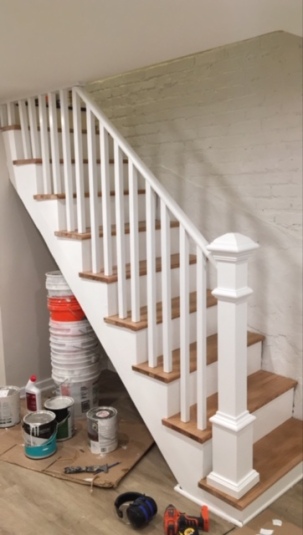 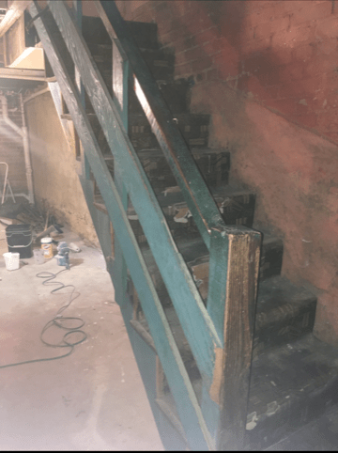 We replaced the staircase going into our basement! To tackle this task, we decided to keep it as simple as possible. We originally had dreams of building under-stair storage with cute doors, but by the time we hit the 15-month mark on our renovation, we were both so fatigued that we coined the mantra “It’s Just A Basement.” We decided not to kill ourselves on the details and just FINISH the damn thing.

When we bought the house, the basement was unfinished and the staircase was barely holding on. The bottom step broke off, forcing us to leap down to the floor (which my mother hated! Sorry, mom). The railing and post were real wobbly and every time I walked downstairs, I braced myself for impact in case the stairs collapsed.

It took about 13 months of living here and running up and down these steps, but we finally got around to replacing them! We waited to do this project until the VERY end. I wanted everything else in the basement to be finished so that we wouldn’t get dirt or drywall dust or paint all over the new steps….but also because DAMN this task intimidated me. Why? Because steps have angles, they require cutting each step and riser with precision, and because the current staircase was such a deathtrap, I didn’t know if we could make it safe.

Luckily, the three stringers under the old staircase (which are the zig zag looking pieces of wood that support the steps) were in good enough condition to re-use. Otherwise, we would definitely have to have hired a carpenter to make new ones for us, which is not cheap. So here’s how we did it:

First we installed the walls and ceiling that surround the stairs, then painted them. Always try to paint the walls and ceiling before replacing your floors! We did this all over the house and it saved a LOT of time covering and protecting the floors. Then I painted the stringer white while Jeremy reinforced the bottom step by ‘sistering’ new blocks of wood next to the three older pieces. Now it will never collapse! Gravity: thwarted!

Next, we pried off the bottom riser and step using a crow bar. Easy enough. For the risers, we used a primed, 8-inch wide piece of finger jointed wood. We measured from the edge of the step to the wall and made a straight cut! It wasn’t so bad! For the step itself, we used these unfinished steps, which are sold longer and wider than you need so you can cut it to the exact size of your staircase. (Side note: stair cases are like snowflakes, they are made by carpenters to fit your exact home. If your home is like ours, the floors, wall, and ceiling are neither level, nor straight, which makes this next step harder). We measured and cut the width and length of the step using a circular saw. A CIRCULAR SAW? ARE WE NUTS? Yes, we are. Because a table saw would have been infinitely easier but we didn’t want to shell out $200 for a tool we’d need on the very last project of the entire renovation! Jeremy had the genius idea to use a straight stud as a guide, and he managed to rig up all the pieces and use the circular saw to “rip” the steps (rip is a fancy shmancy word for cut a long straight line). Once cut, we nailed them in place using our beloved nail gun, aiming to use as few nails as possible so they wouldn’t be too obvious.

We removed a few steps at a time, so Jeremy would cut outside while I measured inside. We got into a nice productive rhythm. Before we knew it, we had replaced all the steps in a few hours!

A few days later, we installed the post on top of the bottom step. There are many methods and ways to do it—we chose to put the post on top of the step because the floor is concrete and nailing into it is very challenging. We bought this post that came with a block that you nail to the ground, then you plop the post over it. It was not that simple but after a little bit of trial and error, we had our post securely fastened!

I didn’t take any photos of the last few hours of work, but we basically installed and painted the bannister and spindles. Then I applied polyeurethane to the steps to seal them, and BOOM, we were done.

The steps aren’t perfect. But they are strong, they are functional, and they are way better than what was there before! Plus, It’s Just A Basement.

One thought on “Basement staircase makeover”